In this compelling book - and hugely popular accompanying BBC series - Richard Holmes charts the extraordinary progress of Britain's greatest-ever soldier from the ruins of his family seat in Ireland to the plains of India, where Wellesley ...

Richard Holmes, highly acclaimed military historian and broadcaster, tells the exhilarating story of Britain s greatest-ever soldier, the man who posed the most serious threat to Napoleon. The Duke of Wellington s remarkable life and extraordinary campaigns are recreated with Holmes superb skill in this compelling book. Richard Holmes charts Wellington s stellar military career from India to Europe, and in the process, rediscovers the reasons Queen Victoria called him the greatest man the nineteenth century had produced. Combining his astute historical analysis with a semi-biographical examination of Wellington, Holmes artfully illustrates the rapid evolution in military and political thinking of the time. Wellington is a brilliant figure, idealistic in politics, cynical in love, a wit, a beau, a man of enormous courage often sickened by war. As Richard Holmes charts his progress from a shy, indolent boy to commander-in-chief of the allied forces, he also exposes the Iron Duke as a philanderer, and a man who sometimes despised the men that he led, and was not always in control of his soldiers. Particularly infamous is the bestial rampage of his men after the capture of Cuidad Rodgrigo and Badajoz. THE IRON DUKE is a beautifully produced book, complete with stunning illustrations and colour plates. Richard Holmes TV series to accompany THE IRON DUKE will be lavishly constructed in four parts, and filmed on location in Britain, India, Spain, Portugal, France and Belgium. 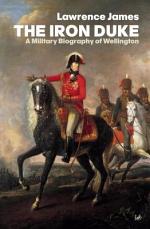 Authors: Lawrence James
Categories: Biography & Autobiography
'Lord Wellington don't know how to lose a battle.' The view of an anonymous soldier at Waterloo became the judgement of the world on the man who was hailed as the first general of his age. At Waterloo he defeated Napoleon, the master of war, and finally checked the disruptive 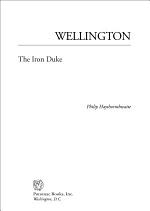 Authors: Philip J. Haythornthwaite
Categories: Biography & Autobiography
One of the Duke of Wellington's officers once remarked, "We would rather see his long nose in the sight than a reinforcement of ten thousand men." Arthur Wellesley, first duke of Wellington (1769-1852), was one of the greatest military commanders in history and is best known as the successful opponent 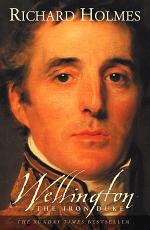 Wellington: The Iron Duke (Text Only) 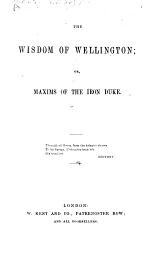 The Wisdom of Wellington: Or, Maxims of the Iron Duke