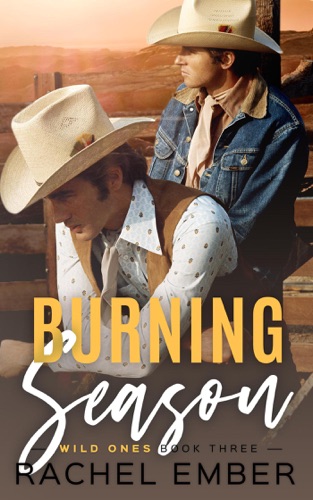 The year is 1972. Dylan Chase is nineteen, and most days he's lucky enough to ride a tough bronc, have a beer with his friends, and maybe even sleep under the stars on his family's third-generation cattle ranch.

Dylan's life would be perfect if it weren't for his forbidden itch. An itch he's only scratched once… with Bo, a hitchhiker he never thought he'd see again. When Bo shows up as the new hire at a neighboring ranch, Dylan is sure his almost-perfect life is about to implode.

After the calves are driven out to the spring pastures, Bo will move on to California. Dylan just has to hold it together until then… if he can.

But Bo can soothe a restless horse with a touch and keeps a battered book of poems in his saddle bag. And the more Dylan learns about him, the more he wants Bo—and the less he wants Bo to go, damn the risk.

Burning Season is the third book in the Wild Ones series, but it can be read as a standalone story.