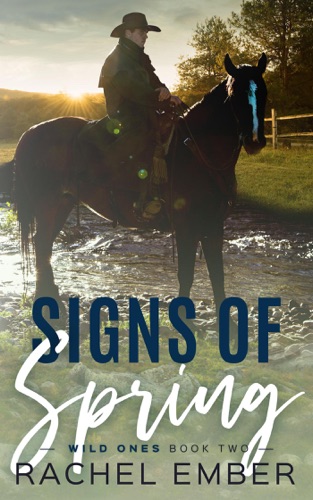 Lance never believed the stars could align for him to have a real chance with Robbie, and even though they've spent every day—and night—together for weeks, a part of him still isn't convinced it's all real. But until the inevitable moment he loses Robbie, Lance intends to savor what they share. When Lance is dragged back to Chicago, he's both relieved and terrified when Robbie offers to come with him.

Robbie loves his family's Nebraska ranch, but he's also been solely responsible for keeping it afloat since he was eighteen. He's always wanted to experience life outside his rural hometown. His glimpse into Lance's friends and work in Chicago is bittersweet. On the one hand, it's all too easy to picture a future in Lance's city and at Lance's side. On the other hand, it seems impossible given Robbie's responsibilities to the ranch, and he doesn't want to hold Lance back from the life and career he's made.

There are more books in the Wild Ones series, but Signs of Spring is the conclusion to Robbie and Lance's love story, which began in Long Winter. The books include complicated family relationships, animal characters, an age gap, a best friend's little brother, pining, hurt/comfort, and lace.