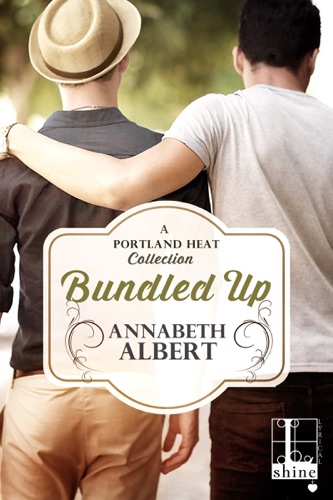 Enjoy the loves and lives of some hard-working men with the first three Portland Heat gay romance novellas together for the first time.

Robby is a barista with a major crush on his customer David, a handsome finance director, and is ready to take their slow-brewing relationship to the next level. David, however, is newly out and single, still grieving the loss of his longtime lover, and unsure if he's ready to date again. Even though things soon heat up for these two, there's still a chance someone could get burned . . .

Vic Degrassi is a baker on the rise who goes after what he wants and gets it, whether it's losing weight, giving up smoking, or graduating from culinary school. This year he wants Robin Dawson, the sweet-hearted hottie who volunteers with him at the local homeless shelter. Robin is suddenly single after being unceremoniously dumped, and Vic is more than happy to offer a shoulder to cry on or something hot and fresh to savor . . .

Chris O'Neal has problems. His restaurant is still co-owned by his ex. He can't remember the last time he had fun. And then there's the hot bakery delivery boy with his sculpted good looks. Lance Degrassi is still in college and preparing for grad school. He should be hitting the books, chasing guys his own age, and not pursuing some gruff motorcycle-riding workaholic. But Lance keeps hanging around Chris, who just might have to indulge himself with something sweet . . .

Praise for the Portland Heat series