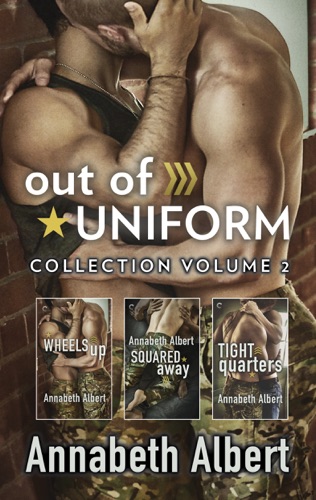 Three more sexy military romances in the Out of Uniform series from Annabeth Albert!

Their love is forbidden, but their hearts aren’t listening to rules and regulations…

Lieutenant Dustin Strauss has kept his bisexual identity under wraps for years, along with his kinky side and a fondness for the military-themed semi-anonymous hookup website Joe4Joe. His latest chat buddy is more than a sexy online distraction—they’re taking their very not-safe-for-work relationship into real time.

Petty Officer Wes Lowe has a smart mouth, a take-charge attitude and an uncanny ability for making things go boom. The life of an enlisted man isn’t always enough to satisfy him, but one wild, no-questions-asked weekend with his online love comes close. But as they log more time online and some very real emotions surface, Dustin and Wes struggle to pretend they’re just a harmless fling.

In the wake of tragedy, SEAL Mark Whitley rushed stateside to act as guardian to his sister’s three young children. But a conflicting will could give custody to someone else—someone Mark remembers as a too young, too hot, wild party boy. Even after six years, Mark can’t shake the memory of his close encounter with Isaiah James, or face up to what it says about his own sexuality.

Isaiah’s totally over the crush that made him proposition Mark all those years ago. In fact, he’s done with crushing on the wrong men altogether. For now, he’s throwing himself into proving he’s the best person to care for his cousin’s kids. But there’s no denying there’s something sexy about a big, tough military man with a baby in his arms.

Petty Officer Bacon, a navy SEAL and ace sharpshooter, has been on the front lines of more than his fair share of dangerous ops. Yet when a minor injury relegates him to the beta team, he’s tasked with what may be his riskiest assignment yet: the silver fox journalist he’s babysitting is the hottest, most charismatic man he’s ever encountered.

Award-winning journalist Spencer Bryant may have been named one of Pride magazine’s most eligible bachelors of the year, but he’s not looking to change his relationship status. He’s a won’t risk his ethics or impeccable reputation by getting involved with a source. Even a sexy-as-hell military man. But while Spencer can resist his physical attraction to Bacon, he has less control over his emotions—especially when the mission goes sideways and the two men are trapped alone.