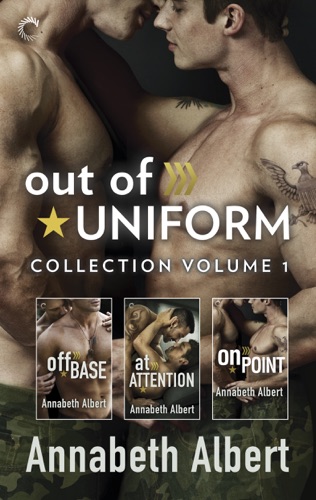 Read the first three books in Annabeth Albert’s critically-acclaimed Out of Uniform series! Male/Male military romance at its very best.

After trading the barracks for a fixer-upper rental, navy SEAL Zack Nelson wants peace, not a roommate—especially not Pike, who sees things about Zack he most wants to hide. Pike’s flirting puts virgin Zack on edge. And the questions Pike’s arrival would spark from Zack’s teammates about his own sexuality? Nope. Not going there. But Zack can’t refuse.

Pike Reynolds knows there won’t be a warm welcome in his new home. What can he say? He’s an acquired taste. But he needs this chance to get his life together. Also, teasing the uptight SEAL will be hella fun. Still, Pike has to tread carefully; he’s had his fill of tourists in the past, and he can’t risk his heart on another, not even one as hot, as built—and, okay, yeah, as adorable—as Zack.

Lieutenant Apollo Floros can ace tactical training missions, but being a single dad to his twin daughters is more than he can handle. He needs live-in help, and he’s lucky a friend’s younger brother needs a place to stay. He’s surprised to see Dylan all grown up with a college degree…and a college athlete’s body. Apollo’s widowed heart may still be broken, but Dylan has his blood heating up.

It’s been eight years since the teenage Dylan followed Apollo around like a lovesick puppy, and it’s time he showed Lieutenant Hard-to-Please that he’s all man now—an adult who’s fully capable of choosing responsibility over lust. He can handle Apollo’s muscular sex appeal, but Apollo the caring father? Dylan can’t afford to fall for that guy. He’s determined to hold out for someone who’s able to love him back, not someone who only sees him as a kid brother.

Pushing thirty, with his reenlistment looming, decorated navy sniper Maddox Horvat is taking a long look at what he really wants in life. And what he wants is Ben Tovey. It isn’t smart, falling for his best friend and fellow SEAL, but ten years with Ben has forged a bond so intimate Maddox can’t ignore it. He needs Ben by his side forever—heart and soul.

Ben admits he likes what he’s seen—his friend’s full lower lip and the perfect muscles of his ass have proved distracting more than once. But Ben’s still reeling from a relationship gone to hell, and he’s not about to screw up his friendship with Maddox, too.