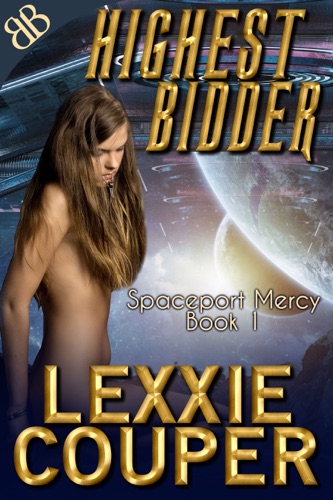 In the vast reaches of outer space, Spaceport Mercy is home to a diverse population. From the wealthy to the poor, soldiers and mercenaries, friends and foes, it's a dangerous place and home to a booming slave trade.

Highest Bidder, by award winning sci-fi paranormal author Lexxie Couper, Book 1 of her Spaceport Mercy series, is a rollercoaster ride to a distant spaceport, where the fate of Old Earth is in the hands of a mercenary and the virgin slave he has been paid to deliver.

Ezelain Dream-Invader Dreylan Tarq was once the Galactic Union's most decorated Peace-Keeper--until he found his wife in his boss's arms and his boss's hands on his wife's ass. Now Dreylan works only for himself--or for whoever's brave enough to pay him the chits. Sent to Spaceport Mercy by the one man he despises the most, Dreylan must buy the Terran slave Naya Kistara, whatever the cost.

Naya is a reiphia, a rare and valuable empathic mesomorph who permanently and irreversibly becomes her first sexual partner's ideal mate in every way. She is also Old Earth's only hope of becoming a member of the GU. Without her, the planet's vulnerable, neglected people will surely perish.

What Dreylan finds on Spaceport Mercy, however, is not just a virgin being sold into slavery, but a woman of fire and passion and strength. A woman who stirs his body like no other. A woman with a secret. Revenge is a powerful motivator. But then, so is desire.