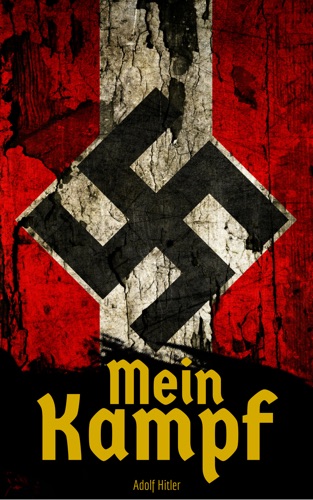 Madman, tyrant, animal - history has given Adolf Hitler many names. In Mein Kampf (My Struggle), often called the Nazi bible, Hitler describes his life, frustrations, ideals, and dreams. Born to an impoverished couple in a small town in Austria, the young Adolf grew up with the fervent desire to become a painter. The death of his parents and outright rejection from art schools in Vienna forced him into underpaid work as a labourer. During the First World War, Hitler served in the infantry and was decorated for bravery. After the war, he became actively involved with socialist political groups and quickly rose to power, establishing himself as Chairman of the National Socialist German Worker's party. In 1924, Hitler led a coalition of nationalist groups in a bid to overthrow the Bavarian government in Munich. The infamous Munich "Beer-hall putsch" was unsuccessful, and Hitler was arrested. During the nine months he was in prison, an embittered and frustrated Hitler dictated a personal manifesto to his loyal follower Rudolph Hess. He vented his sentiments against communism and the Jewish people in this document, which was to become Mein Kampf, the controversial book that is seen as the blue-print for Hitler's political and military campaign. In Mein Kampf, Hitler describes his strategy for rebuilding Germany and conquering Europe. It is a glimpse into the mind of a man who destabilized world peace and pursued the genocide now known as the Holocaust. "... I believe today that my conduct is in accordance with the will of the Almighty Creator. In standing guard against the Jew I am defending the handiwork of the Lord"